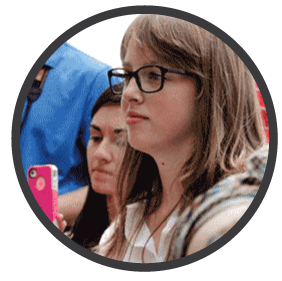 Becoming a journalist never entered the mind of AP-Google Scholar Lindsey Cook; rather it fell into her lap.

After walking down Baxter Hill with her first attempted article for The Red & Black bleeding with red ink and dripping with the sting of failure, the computer science and journalism major — the only one at the University of Georgia — felt an urgency to prove that one recruitment editor wrong.

“The quickest way to get me to do something is to tell me I’m bad at it,” Cook said. “It’s like ‘shut up, I’m smart,’ so I went out and bought an AP Stylebook and read it from cover to cover in two days, which I guess is really nerdy because most people don’t even read the AP Stylebook.”

Cook dissected every aspect of the stylebook, taught herself article structure and landed on the doorsteps of Grady College.

And Grady, she said, welcomed her with open arms and helped her whenever she needed it — even from professors she hadn’t met.

“The thought that you have never met a professor and they can seek you out and know who you are and know your name and help you out,” Cook said. “I don’t think you would ever find that in another college at UGA.”

In particular, she connected with a handful of journalism professors, including her mentor Barry Hollander. Cook said the two of them clicked because neither of them fit the norm.

“We both love technology and data, and he’s kinda scruffy, and I’m kinda scruffy,” she said. “As a freshman, I remember being really scared of him, but I guess we grew into a mentorship, as well as with other professors at Grady like John Greenman and Keith Herndon.”

Even the Grady College alumni continue to be enthusiastic about helping Cook in any way possible. One even helped her land an internship as the Interactivity Producer at The Washington Post.

Although Cook received a large amount of advice from professors and alumni, she isn’t afraid to offer her opinion right back. She said she’s never been quiet about criticizing the curriculum at Grady, and every time she’s done that, the person she has spoken to took the advice under consideration.

“None of them had been like, ‘You’re 21. You’re a student. What do you know?’” she said. “I think that’s really powerful at a journalistic institution; that you can have the power to shape your curriculum and shape what you’re learning.”

That personal experience shaped the journalist Cook has become.

“You can definitely pick your activities and who you spend your time with at Grady,” she said. “And that so much changes you as a journalist.”