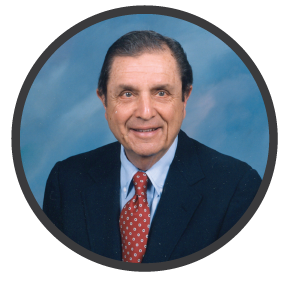 All Claude Williams needed in high school was a living room, a family audience, a microphone and a radio — then he was doing the neighborhood news.

Williams’ excitement for media exuded from childhood and carried him through a long and successful career in Athens.

“Journalism is a noble ambition,” the Grady College grad and Legion of Honor recipient said. “But there are difficulties. The jobs are few and far between.”

Still, he took that passion for journalism all the way to North Georgia College. After returning from service in World War II, Williams traveled to Athens, applied for a job at WRFC and began his studies at the University of Georgia.

“The war dominated all phases of our lives at that time,” Williams said. “You knew what was ahead of you. You were going into the military, and if I didn’t go to North Georgia College for two years, I’d be lost in the army.”

However, it wasn’t long before Williams knew “nothing ever happens until somebody sells something.” He took ownership and started Williams and Company in 1958. The circuit called the Advertiser became the Athens Daily News in 1964.

“We started on a shoestring and not a great deal of capital,” he said. “After four years, we had the largest circulation in Athens.”

Williams said he was a joiner early in his life, but he knew he needed to commit to organizations he truly cared about, including Grady College.

He missed only one meeting in eight years on the UGA Foundation Board, visited deans every year and created the Claude Williams Jr. Venture Fund — all to give back to future journalists.

“I want to contribute to helping students and people, not brick and mortar,” Williams said. “That’s been a theme in my civic and outside activities, and you ought to give back to your community. If you live in a community, you better be involved in that community.”

Even after retiring, Williams has stayed active and effective.

The foundation of journalism — the who, what, where, when and why — drove him through a noble career and sparked his interest everyday.

“I look forward to coming to work everyday and solving the problems,” Williams said. “A lot of people hate to work, they don’t like their job and they don’t have a way out of it. I did.”